The agreement was signed on October 2013 (effective as of November 1st, 2013), and will facilitate the sale of Adlens®’ Fluid-Injection line, The John Lennon™ Collection and its two Alvarez technology based lines, Emergensee™ and Adlens® Adjustables™, in Brazil.

“As the host nation for the FIFA World Cup and the Olympic Games the eyes of the world will be trained on Brazil over the coming years.” said Adlens® CEO and Executive Chairman Michael C. Ferrara. “With Adlens® on sale around the country we will be in a position to reach a rich variety of consumers and enhance our current profile in Latin America.”

Carlos Guilherme, founder of OptiClass, commented: “Adlens’® innovative variable focus eyewear is already proving popular in Latin America, and we are very excited to be introducing them to Brazil.”

The John Lennon™ Collection – endorsed by Yoko Ono – is thesecond generation of Adlens®’ variable focus eyeglasses based on Fluid-Injection technology and covers range of -4.5 to +3.5 dioptres. It was designed to provide a simple way of achieving instant prescription and immediate dispensing.

Emergensee™ and Adlens® Adjustables™ – are the first and second generation of variable focus glasses based on the Alvarez technology. They consist of two wave-shaped plates that glide across one another to change the power of each lens (-6D to +3D).

OptiClass was set up in 2010 by founder Carlos Guilherme with all the know-how of the optical market in its management. A combined history of over 20 years in the industry, with extensive experience in the distribution of important brands in Brazil, OptiClass is committed to providing quality service, both in sales and after sales. In addition to the concern of enhancing the result of the point of sale, OptiClass is always seeking to meet expectations and needs with the best options that will assist in the success of their customers and partners. For further information: www.opticlass.com.br

Founded in 2005 in Oxford, England by businessman and philanthropist James Chen, Adlens® is the global leader in variable focus eyewear. Its highly skilled team of engineers, eyecare professionals and designers has developed a completely new category of vision correction. Adlens® is a commercial business with a social soul: for every pair of Fluid-Injection glasses purchased, the company donates a pair of glasses to someone in the developing world as part of its Buy One Give One programme. Distribution of the glasses is administered by Vision for a Nation®, a charitable foundation running an innovative programme to provide universal access to eyeglasses, one nation at a time, starting in Rwanda. 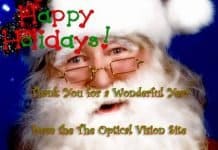