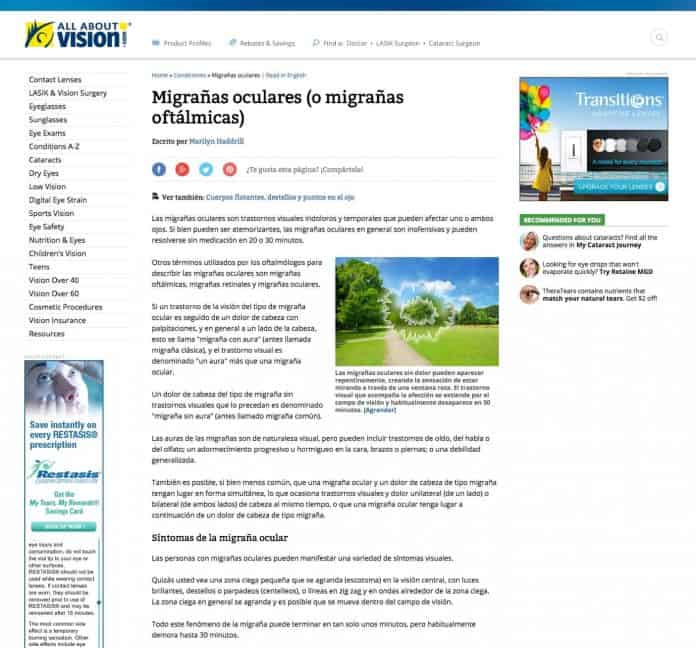 San Diego, Calif., December 6, 2016 – AllAboutVision.com has launched Spanish translations of some of the most popular articles in its Eye Conditions & Diseases section.

“Our readers already generate more than three million monthly page views of our articles about eye conditions and diseases,” said Gary Heiting, O.D., senior editor of AllAboutVision.com. “It makes sense to expand access to this information by making it available in the second most common language spoken in this country.”

Translated topics include astigmatism, cataracts, conjunctivitis, macular degeneration and presbyopia. A total of 17 Spanish articles are currently available. The extent to which the translation efforts will be broadened in 2017 will be determined by the traffic generated by the initial group of articles for the remainder of this year.

The translated articles can be found at www.allaboutvision.com/conditions-es.

Now in its 17th year of publishing, AllAboutVision.com has averaged almost one million unique visitors per week in 2016, measured weekly by Google Analytics. The site has been recognized by numerous mainstream media as an authoritative source of information about vision and eye care, including citations by The New York Times, The Wall Street Journal, USA Today, ABC World News and other print publications and broadcast outlets. AllAboutVision.com is a Preferred Partner of the Think About Your Eyes national public awarenes