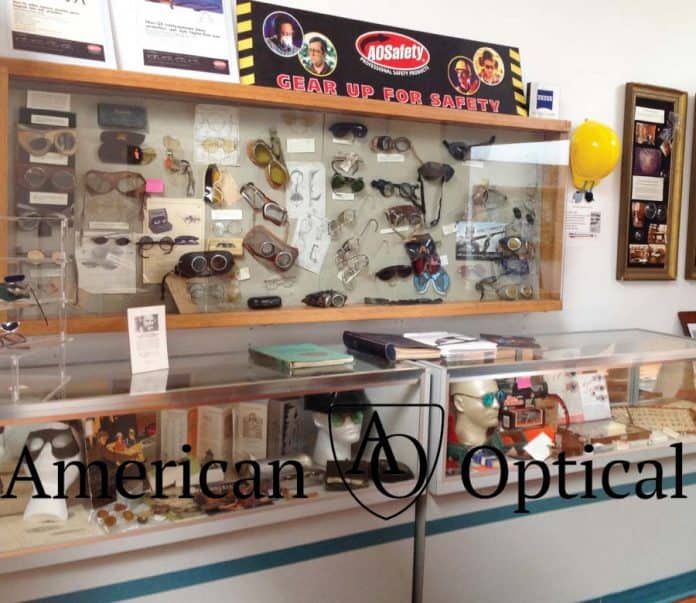 This year at Vision Expo West, attendees will have the unique chance to delve into the history of American eyewear manufacturing. The exhibit, entitled From the Archives…American Optical (AO) through the Centuries, is brought to you by AO Eyewear in collaboration with the Optical Heritage Museum. It will showcase AO inventions that revolutionized eyewear and optics and one-of-a-kind items that became part of – not just optical history – but American history. Vision Expo badge holders can visit the limited engagement exhibit at the Europa Eyewear booth #P16043 during exhibit hall hours.

AO Eyewear’s heritage, dating back to 1833, is not only full of impressive innovations in manufacturing but also celebrated moments in American history. AO was the first company to provide sunglasses to American military pilots. Their sunglasses were also the first on the moon; the iconic style, now known as the Original PilotTM, was worn by the entire Apollo 11 crew and is now on exhibit at the Smithsonian. The AO Saratoga was a key part of JFK’s classic American style.

The VEW exhibit features items dating all the way back to AO’s founding in 1833, that previously could not be seen outside of the Optical Heritage Museum. These items show firsthand how the optical industry has evolved over the past 200 years. Highlights include one of the first sterling silver frames made in America from the 1830s, AO’s revolutionary driving goggles from the turn of the 20th century, flight goggles developed for WWI and WWII US military pilots, and original Saratoga sunglasses from the 1950s.

The Optical Heritage Museum was established in 1983 on the site of AO’s Southbridge, Massachusetts plant. The museum is dedicated to the preservation, research, and education into the history, growth, culture, and contributions of the optical industries from the 19th Century to the present. Established in 1983, it has one of the largest collections of Spectacle Frames and Ophthalmic Optical items in the world. AO Eyewear is proud to bring From the Archives… American Optical through the Centuries to VEW with the support of the Optical Heritage Museum.

Alongside the exhibit, attendees can see the most iconic AO Eyewear styles, re-released and upgraded, and the first new AO Eyewear sunwear styles in decades, sure to become this century’s classic looks. If you would like to secure a time to see the line along with the exhibit, click here.

Known for its heritage and quality, American Optical’s eyewear division pioneered metal eyewear manufacturing in the US. As the first sunglasses on the moon and a favorite of JFK, AO’s history is American history. AO Eyewear is as committed as its original founders to producing the highest quality, innovative, American-made eyewear products that withstand the test of time.

Independent for the independent, since 1977. To this day, Europa Eyewear remains owned and operated by its founding family. The Europa business model is uniquely designed to ensure that like-minded, independent practices remain vital parts of their communities, with the freedom to put patient care above all else. That’s why Europa offers exceptional customer service, industry-leading warranties, and guaranteed sell-through. All 11 brands in their portfolio, including Scott Harris, Cinzia, and the American-made STATE Optical Co. and Alan J Collection have been built independently inside of the optical industry. Europa is also thrilled to have acquired AO Eyewear, expanding their US manufacturing and bringing the line back to opticals nationwide.