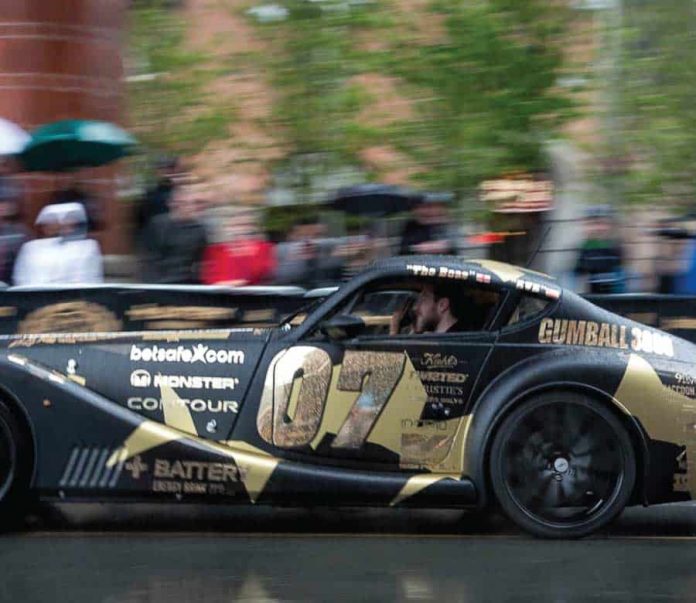 This year, starting June 7th and continuing through June 15 will be 20th Gumball 3000 rally. Kicking off from Mykonos for a 3000-mile road trip to Ibiza, the Gumball 3000 Rally will mix top celebrities, influencers, and crazy supercars owners to enjoy together a full week of terrific experiences and challenges.

Started in 1999, the Gumball 3000 Rally is an annual luxury automotive road trip taking place every year and traveling a different 3000-mile route. Drive through capital cities in front of hundreds of thousands of fans and photographers as Gumball shuts down famous landmarks in each city where spectacular static car displays are hosted and documented by the world’s press.

All these Gumball 3000 ingredients are close to the spirit of Carrera: a perfect mix of daring attitude, fashion-forward style, and speed to bring a step ahead of the brand’s #driveyourstory communication platform.

This year, the Carrera Driving Team will run the engine of a very special Alfa Romeo Supercar in Mykonos and reach Athens together with the other 120 participant cars, where the rally continues traveling across Tessaloniki, Porto Montenegro, Venice, Monaco, Barcelona and finally Ibiza.

Gumball 3000 Founder and CEO, Maximillion Cooper says of the partnership “I am absolutely delighted to be able to partner with Carrera on our 21st Birthday Rally. My first pair of special sunglasses was Carrera, and to have them be part of my vision is a dream come true. We fully embrace their ethos and excited to be part of their #driveyourstory campaign. The last two decades have provided countless stories and adventures for drivers and spectators alike and this year will be no different”

CARRERA x KAPPA x GUMBALL3000 LIMITED EDITION
For this special occasion, Carrera joins forces with another official partner of Gumball 3000, KAPPA, presenting two limited edition styles: Carrera Glory/SE and Carrera Hyperfit 5046/SE. Both styles feature the official colors of Gumball 3000, black and gold, and are personalized with the famous Kappa “OMINI” logo on the elastic band. The GUMBALL 3000 logo also appears on the end of the tip.

Both styles come in single and double superb Carrera GUMBALL 3000 boxes.
All the styles will be on exclusive presale form May 30th at Selfridges, London, and from June 7th on carreraworld.com and Gumball 3000 e-com, on top of on selected retail stores along the rally route.

CARRERA 3000/SE: A GOLD PLATED ONE OF A KIND MASTERPIECE FOR CHRISTIE’S AUCTION TO SUPPORT THE GUMBALL 3000 FOUNDATION

Not only speed and entertainment. Established in 2013, the Gumball 3000 Foundation intends to benefit underprivileged youth through educational and recreational infrastructure based projects around the world.

The mission is to give underprivileged youth greater opportunities in life, ensuring that future generations are invested in and presented with every occasion to be the best version of themselves.

During the annual Gumball 3000 rally, the Foundation hosts a live auction in partnership with Christie’s as well as the Online Charity Grid, where all the participating teams compete to start the rally in pole position by donating money to their team. To date, the Gumball 3000 Foundation has raised £2.5 million.

This year in Monaco, Christie’s will present the exclusive objects and experiences donated from partners and participants for a bid to donate as much as possible and therefore sustain the Gumball 3000 charity activities.

For this purpose, Carrera is proud to introduce one of the highest expressions of its product craftsmanship: the gold-plated edition CARRERA 3000/SE, specially crafted for the ‘Gumball 3000 – Mykonos to Ibiza’.

Inspired by the brand’s heritage in the world of sports and connected with one of the most recent trends, this one of a kind mixed-curved shape with lower temples – all plated in gold 18K – makes this style a real unique piece of craftsmanship. Combining the most iconic brand’s details such as the “C” logo finished in metal as the hook that holds the lens with the frame, together with the temples enthused by Carrera’s archive that are completed with a metal wire ending into the same format of the “C” logo, the Carrera 3000 is a high quality fine piece of eyewear with strikingly exquisite design.