“Since being founded on Long Island in 1949, ClearVision has employed four generations and over 20 members of the founding family,” said Jennifer Trakhtenberg, Senior Talent Leader of ClearVision. “Over the past six decades, ClearVision has continued to stay true to its original values. This recognition is a testament that caring for people, focusing on having an engaged culture, and striving to make each day better for someone else is a successful business strategy.”

This award marks ClearVision’s second recognition by SmartCEO. In 2015, ClearVision was honored in the Deals of Distinction Awards, which was developed in partnership between the Executives’ Association of New York City (EANYC) and SmartCEO. ClearVision won in the B2C, large company category for its philanthropic efforts for Big Brothers Big Sisters of Long Island (BBBSLI), particularly, for a record breaking clothing drive.

Founded in 1949, ClearVision Optical is an award-winning leader in the optical industry, designing and distributing eyewear and sunwear for top brands such as Revo, Aspire Eyewear, BCBGMAXAZRIA, Ellen Tracy, IZOD, Marc Ecko Cut & Sew, Op, and Jessica McClintock. ClearVision’s house brands include PuriTi Titanium, DuraHinge, Dilli Dalli pediatric eyewear, ClearVision Collection, and Junction City. A privately held company, ClearVision is headquartered in Hauppauge, New York and has more than 250 associates throughout the U.S. ClearVision’s collections are distributed throughout North America and 20 countries around the globe.

About the Family Business Awards

The Family Business Awards program honors family businesses that make up the backbone of the American economy. From small, boutique operations to large multi-generational firms, these entrepreneurial families are building business legacies that will last for generations to come. More than two thirds of privately held businesses in the U.S. are family-owned firms, but many times they are overshadowed by large public organizations. That’s why SmartCEO is honoring and celebrating the family businesses that are successful, growing and moving America forward. Honorees will be profiled in the September/October issue of SmartCEO magazine and celebrated at an awards gala in September. 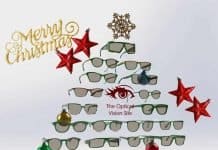 Should You Swim With Sharks And Start An Eyewear Business?