March 13 is National Ear Muff Day! Once upon a time a 15 year old kid named Chester Greenwood, got tired of keeping his ears warm which ice skating in Maine. At 18 years old, he patented his Champion Ear Protectors. When he died in 1937 he had over 100 patents. Even better, The Smithsonian Institute named Greenwood one of America’s top 15 outstanding inventors and December 6th is Chester Greenwood Day in Maine.

Looking back at ‘Ear Muffs’ we investigated other ear -muffy types of eyewear. We did not find too much except that fur and other fabrics have been used as adornments on temples over the years. This makes sense in cold climates, as temples tend to get very cold.

The first Muffed Temples we found were circa 1950’s.

Several Catwalks have shown a muff-type of temple like this Alexander Wang x Linda Farrow for Fall 2011.

Fendi Fall Winter 2013 followed up with a sparkly version on the runway in 2013.

While not an Ear Muff, Givenchy did come out with a warm look for Fall 2012.

Natasha Morgan’s Mink Adornments is also on top of the frame, with a hood look.

Yves St. Laurent’s side shields of Rabbit Fur in 2016.

On Kickstarter SunMuffs received their crowdsourced goal to produce their SunMuffs which attach to the eyeglasses. 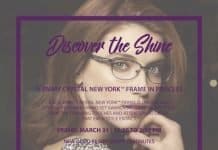 A History of Presidential Eyewear 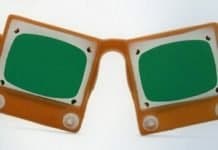