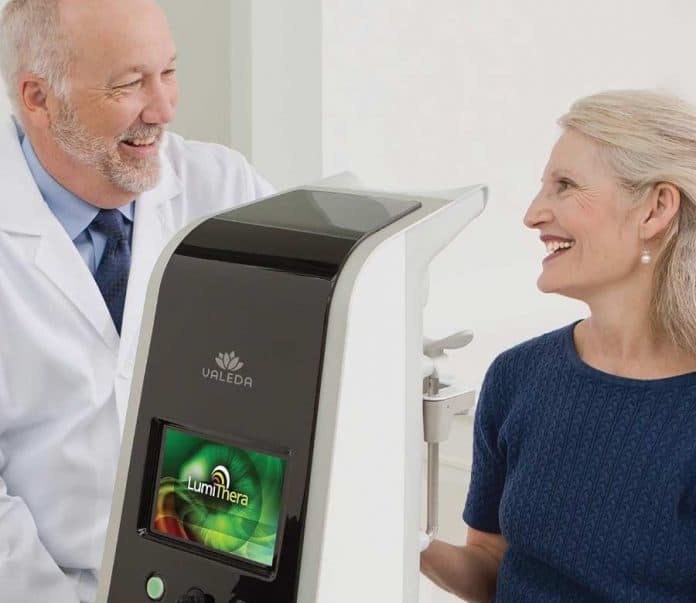 LumiThera Inc., a commercial-stage medical device company delivering photobiomodulation (PBM) treatment for ocular disorders and diseases, today announced it has initiated further studies with the University of Wisconsin-Milwaukee to establish the use of their Photobiomodulation platform in Diabetic Retinopathy (DR).

“Recent research in our labs in both preclinical and clinical areas have indicated potential in treating diabetic edema with PBM,” stated Janis Eells, Ph.D., Professor, University of Wisconsin-Milwaukee. “Our work shows that early PBM benefits in reducing the detrimental effects of high glucose on retinal cells and early human data is now starting to show benefits in the clinical setting.”

DR is the leading cause of blindness in the world. The International Diabetes Foundation 2019 Fact Sheet estimated that globally 463 million people have diabetes now, and future estimates suggest that this number will increase to 578 million by the year 2030.

“We have been working with Dr. Eells and the University of Wisconsin-Milwaukee on our dry AMD research and the work in DR and Diabetic Macular Edema (DME) is a logical extension of our PBM platform,” stated Clark E. Tedford, Ph.D., President, and CEO of LumiThera, Inc. “The results from Dr. Eell’s lab point to the multiple cellular benefits of treating the disease early and PBM would be an alternative approach for the treatment of early disease.”

LumiThera was granted a CE mark to commercialize the Valeda System in European Union for the treatment of ocular diseases including dry AMD. The company previously announced that the National Institutes of Health and division of the National Eye Institute have provided a $2.5M grant to support the LIGHTSITE II multi-center clinical trial to lead to U.S. approval for dry AMD. The Company is enrolling two multi-center trials, one in European Union and one in the US for dry AMD. The entry into DME provides a second major ocular disease platform for the Valeda system.

“We are excited to be involved in the development of Valeda for both non-neovascular (dry) AMD and DME. We are currently enrolling patients in the LIGHTSITE III study and believe that PBM could be an even bigger platform for DME,” remarked Quan Dong Nguyen, M.D., M.Sc. and Diana V. Do, M.D., Professors of Ophthalmology at the Byers Eye Institute, Stanford University. “DME is the leading cause of functional vision loss among working adults worldwide. Treatments with intravitreal injections of pharmacologic agents are effective but can be costly and invasive. PBM could provide a significant improvement to the current practices with its non-invasive approach.”

“I am continually impressed with the scientific foundation that LumiThera is building for PBM with collaborations in both preclinical and clinical research,” stated David Boyer, M.D., Retina-Vitreous Associates Medical Group. “The benefits for PBM on multiple critical cellular pathways involved in the disease etiology in preclinical work is now being evaluated in the clinical setting and could change the way we address chronic disease that leads to blindness.”

About LumiThera Inc.
LumiThera is a commercial-stage medical device company focused on treating people affected by ocular disorders and diseases including dry AMD, a leading cause of blindness in adults over 65 and DR, the leading cause of blindness in the world. The company is a leader in the use of PBM for the treatment of acute and chronic ocular diseases and disorders. The company is developing the office-based Valeda Light Delivery System to be used by eye care specialists for medical treatment.

The Valeda Light Delivery System has been granted authorization to use the CE Mark by an EU Notified Body as required for commercial use in the European Economic Area only. Valeda is not approved for use by the Food & Drug Administration (FDA) in the USA.