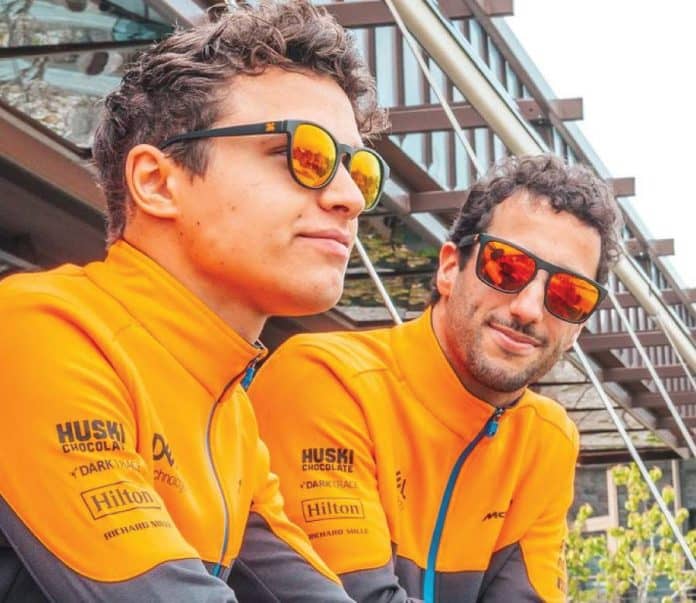 In celebration of the partnership, SunGod will be releasing a limited-edition McLaren Racing model of their Renegades and Sierras sunglasses for the 2021 season. Later this summer, SunGod will also be launching eyewear ranges with McLaren F1 drivers, Lando Norris and Daniel Ricciardo.

The partnership represents a unification of the two British brands in their three core values of innovation, community, and sustainability. Since the start, the pioneering approach by SunGod to make better and more sustainable eyewear has revolutionized the industry with their social and environmental performance set at the highest standard. Building products that last and are designed to enhance adventures is at the heart of the SunGod mission and is a key focus of the partnership with McLaren.

The new variations of the Sierras and Renegades released as part of the launch will be available with Fire, and Smoke lenses. Each will utilize their premium, 8KO lens technology – a new, higher grade nylon-based lens material, resulting in a lighter lens and a higher level of optical precision compared to the industry standard polycarbonate.

“SunGod is setting a new standard in the eyewear industry with sustainability at the heart of everything they do. SunGod’s alignment with McLaren comes in their identical passion for performance, innovation, and sustainability, and therefore we are delighted to welcome SunGod as a partner of the McLaren Formula 1 team from the 2021 Formula 1 season.”

“We’re incredibly proud to be joining McLaren Racing for the 2021 season as an official partner. Balancing an unrivaled focus on performance with innovative ideas about how to make our future more sustainable, our brand ethos’ – and that of our communities – align perfectly. As a British company, we’re hugely excited to see superstars like Lando Norris and Daniel Ricciardo wearing SunGod sunglasses and wish them the best of luck in the coming season.”

For more information on the new range, and all of SunGod’s sunglasses, visit sungod.to/w/mclaren-f1-team