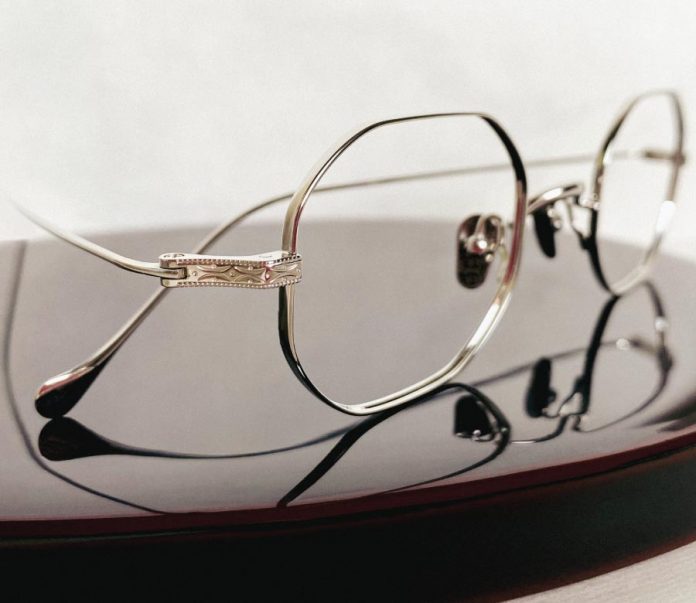 Minamoto, the exciting and original Japanese eyewear brand, has set the world alight. The word Minamoto, meaning origin in Japanese, guides this superior collection, reflecting the Japanese
heritage and quality of the brand. Sabae, located in the Fukui prefecture, is the birthplace of the Japanese eyewear industry and where our story originates. A long tradition of craftsmanship is kept alive here, from lacquerware to the manufacture of washi paper and, of course, eyeglasses.

Envisioned, designed, and made in Japan, each sophisticated Minamoto frame pays homage to Sabae’s craftsmanship and to affection for enduring beloved treasures. With a nod to the Zen philosophy of minimalism, Minamoto frames are beautiful in their simplicity. Each look is made of the highest quality Japanese titanium and intricate Japanese kanji engravings, such as the Minamoto logo, appear on the frames. Completing the circle of creation, these masterpieces are presented in unique cases handcrafted from washi paper, which is also made in Fukui.

New Minamoto styles are led by several facets of Japanese culture. Firstly, the ancient Japanese art of lacquerware or urushi: this special resin is applied by skilled craftsmen to coat and decorate tableware and objets d’art. Urushi-like red and black color accents appear on selected Minamoto models. Secondly, the films of esteemed Japanese filmmaker Akira Kurosawa: while the first Minamoto collection was a testament to Kurosawa’s Seven Samurai, these new models are named after characters from other Kurosawa classics.

Sanjuro shares its name with the hero and title of the classic Japanese feature film. The Minamoto Sanjuro frame, in antique grey, gold plating, and white, has a masculine geometric shape and reveals a classic pattern on endpieces.

The Kunie frame pays homage to the character in the action-packed Samurai classic Sanjuro. This unisex look flatters with its stylish vintage appeal. Rims are rounded and a classic pattern is engraved on the bridge and endpieces. This light frame is finished in antique gold, gold plating, and grey.

The Iori frame, in light gold, antique gold, and gold plating, takes its name from a Samurai character in the classic Japanese feature film Sanjuro. A frame for everyone, this minimalist eyewear delights with its clean geometric rims and unique color finishings: antique gold, urushi-inspired temples, and demi-patterns on selected models.

A heroine from the Japanese Samurai film Sanjuro, Chidori lends her name to this striking
women’s frame. Round shaped with a subtle cat-eye tilt, this weightless look is available in
white, rosé gold, and gold plating. Contrasting rim colors in urushi black or demi patterns on selected models, as well as a classic pattern on the bridge and temple, make this a statement style piece.

Named after a character from the classic Japanese samurai movie Sanjuro, the Hanbei
frame in white, antique brown, and antique gold, impresses with its rimless geometric shape and advanced monoblock pressure mount system. This masculine look reveals a classic pattern on the bridge and endpieces.

Sharing its name with a character from the Kurosawa adventure Hidden Fortress, the elegant Izumi glasses are softly square and delicately colored in white, grey and gold plating. A classic pattern on the bridge and unique finishes set this style apart: demi patterns and urushi-inspired black on selected models.

Princess Yukihime is a force of nature in the classic Japanese action film Hidden Fortress.
Inspired by her strength and elegance, the round-shaped Yukihime frame delights in rosé gold, grey, demi brown, and gold plating. Sophisticated urushi red or demi finishings on selected models and a classic bridge pattern enhance the premium quality of this frame.

General Hyoe is a character in the beloved Kurosawa feature film Hidden Fortress and the
name of this square masculine frame style. Hyoe stands out in white, antique gray and gold
plating. Unique touches include demi tones and antique finishings on selected models, and a classic pattern on bridges and temples.

A hero of the Japanese film classic Hidden Fortress, Rokurota is also the name of this high-quality men’s eyewear. Rounded rims and light grey, gold plating, or antique gold tones evoke classic retro style. Wearers will appreciate the exclusive antique and demi pattern finishing on selected models as well as engravings on the bridge and temples.

This sophisticated frame is named after Tsurumaru, a heroine of the Japanese movie classic Ran. The rimless panto style has an advanced monoblock pressure-mounted composition that emphasizes its airy contemporary flair. In light grey, burgundy, and gold plating, urushi-inspired red finishing on selected models and elegant engravings intensify this eyewear’s rich aesthetic.

Named after a young heroine in the Japanese film Red Beard, the Otoyo frame flatters with
its rimless geometric shape and airy look. An advanced monoblock pressure mount system
underlies the spare look. Temples and bridge are expressed in rosé gold, white and antique
grey. An exclusive classic pattern is revealed on the endpieces and the bridge.

See these and the entire Minamoto collection on their website minamoto-eyewear.com. 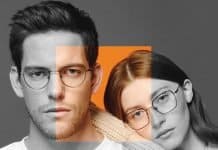 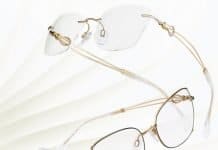 Line Art CHARMANT – Glasses That Are Seen And Felt