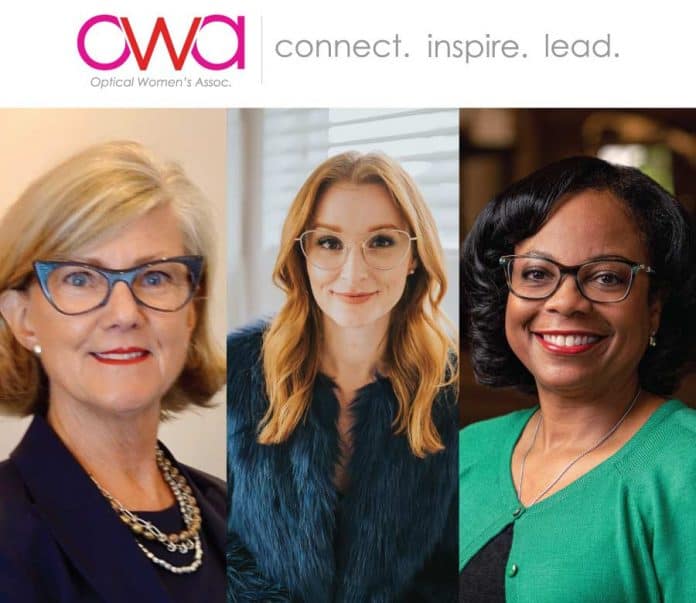 Millicent Knight, OD and Senior Vice President, Customer Development Group, at Essilor of America, will receive the Pleiades award to recognize her exceptional action in advancing the leadership role of women in the optical industry.

Jean Sabre, owner of Uptown Vision, will receive the Pyxis award to honor her as a member of the OWA who actively participates in the organization and contributes to our continuing growth.

Sheena Taff, optician, and optical writer, also known as Optician About Town, will receive the 2020 Visionary Award, newly created this year to recognize her as an OWA member who demonstrates progressive thinking and actively cultivates the professional development of women.

“Each year, the OWA carefully selects women in our industry who exemplify the best in leadership, forward-thinking views, and commitment to the optical industry. This year, I’m pleased to recognize three amazing women, Millicent, Jean, and Sheena, for their professionalism, dedication, and fearlessness, and mostly for being part of the incredible network of OWA women,” said Robyn Crimmins, OWA President.

These women will be honored at International Vision Expo East during the OWA’s Annual Champagne Breakfast on Thursday, March 26, 2020, at Gotham Hall in New York City. This event will also feature keynote speaker Erin O’Malley, a facilitator and trainer who works with leadership teams and organizations to craft cultures of trust, connection, and loyalty. The breakfast is sponsored by Luxottica and the OWA.

She has a diverse and extensive background in the eyecare industry, including hospital-based ophthalmology/optometry, owner of two optometric practices (North Shore Eye Center and Integrative Eye and Wellness Center), and a former member of Vision Source.  Prior to Essilor, she was Vice President of Professional Affairs, North America at Johnson & Johnson Vision, Inc.

Knight holds a Doctor of Optometry degree, and two Bachelor of Science degrees.   She has served on the Board of Trustees for Augustana College and the Illinois College of Optometry, her alma maters, and was awarded Alumnus Professional Achievement Awards. Knight was awarded the J&J Standards of Leadership Award, twice selected as one of Vision Monday’s Most Influential Women in Optical, and a Women in Optometry Theia Award for Leadership recipient.  She is a Fellow in the American Academy of Optometry, the American Academy of Anti-Aging Regenerative Medicine, The National Academies of Practice, and a Kellogg Leadership Fellow.

Knight took an interest in this field as a child with myopia and an accommodative disorder resolved with vision therapy at Illinois College of Optometry (ICO), and by age 8, told her father she was going to be an eye doctor.  She is a passionate advocate for quality patient care, has mentored many students and colleagues, and benefitted from their mentoring as well.  Her husband and life partner is Harvey Echols, MD and they are the parents of one son, Matthew.

Jean Sabre: Jean Sabre, along with her husband Dr. Mark Sabre, founded Uptown Vision in Minneapolis, MN in 1991. In her role with the clinic, she is the practice administrator, buyer and lead optician. Before entering the optical profession, she held management and sales positions throughout the US with major retailers including Marshall Field’s, Nordstrom, and Barneys New York.

Sabre has been a member of the OWA since 2004 and currently serves on the Membership Committee, where she heads up the Student Ambassador program. She is excited to be facilitating the outreach to future members of the optometric and optical professions via the OWA. Formerly, she served on the Board of Directors of the OWA as co-chair of the Mentorship Committee.

Sabre has also served on Transitions Optical’s Pro Forum advisory panel for the past 10 years and on the Board of Governors of Interlachen Country Club in Edina, MN. Her optical interests include mentoring others, emerging eyewear and lens technology, and practice management. She enjoys spending time with her husband, traveling, running, bike riding, and golf.

Taff has gained attention for her tenacious drive to change the perspective of the optical experience. Her mission is to share the benefits of wearing quality eyewear and to change the perception of what it means to wear glasses. She has a monthly column in EyeCare Business magazine and is the founder of the #EyeStyleInfluencers, an industry group committed to educating peers and the public on the importance of eye health and seeing an eyecare professional. In her blog OpticianAboutTown.com, she shares her fashion-forward perspective and the joys of “EyeStyle” while focusing on the equal importance of lenses as part of the story.

Taff utilizes her role as an industry influencer, writer, and speaker to share her unbridled passion for the optical industry and all the creative freedom and diverse opportunities it affords.

About the Optical Women’s Association: Founded in 1997 as a nonprofit, the Optical Women’s Association is committed to supporting and promoting the professional development of women involved in all facets of the optical industry. As the vision of the OWA evolves and expands, it maintains the focus of the OWA’s founding principles and core mission: to enhance and promote the leadership role of women in the optical industry through networking, education, and peer support.