February 23, 2009–With a head like a fighter-plane cockpit, a Pacific barreleye fish shows off its highly sensitive, barrel-like eyes–topped by green, orblike lenses–in a picture released today but taken in 2004.

The fish, discovered alive in the deep water off California’s central coast by the Monterey Bay Aquarium Research Institute (MBARI), is the first specimen of its kind to be found with its soft transparent dome intact.

The 6-inch (15-centimeter) barreleye (Macropinna microstoma) had been known since 1939–but only from mangled specimens dragged to the surface by nets. 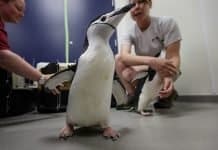 EyefoGraphic: How Animals See The World